After the find of a certain projection in Cartometric Analysis I of the 1367 Pizigani chart the next step in cartometric analysis is to look for an optimized projection, the one the portolans probably originally had. A new software was used to find a better fit equirectangular projection and compare it to a Mercator fit. For that purpose a different approach was used than before. In the previous analysis the portolan was zoomed over a modern map and the average difference of the best fit was given in km. Now the outline of a modern map was placed over the portolan and the difference given in mm. That way a subtle error was removed.[1] A new length base for the portolan was chosen and adjusted to allow direct comparison with the results of the previous analysis.[2]

The best result was an equirectangular projection on 34.5° N with 8.393 mm error. That is very close to the 8.404 mm for the 35°[3] previously used. The suspected original 36° projection[4] was by 8.452 mm close too. The error by the medieval compilers was certainly larger than 0.2 mm. So all these projections are in the same error range. Just the Mercator with 9.497 mm looks less likely. The Mediterranean graphic results of Analysis II look much like before in Analysis I. 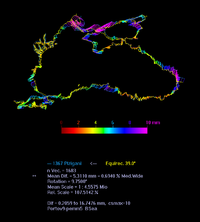 Cartometric Analysis II of the Pizigani Black Sea.
The Black Sea, including Marmara Sea, had a best fit equirectangular projection on 39.0° N with 5.31 mm error (Mercator: 6.30 mm). Excluding Marmara Sea the mean error would rise to 5.40 mm and projection shifts to 38.7° N. So the quality of the Black Sea map part is inferior to the more difficult to navigate Atlantic. It seems the Black Sea is just poorly compiled and its larger scale (107.5 %) is a result of that, too. 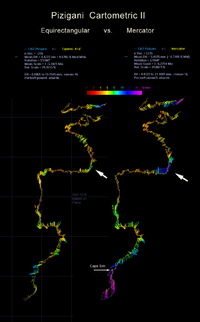 Cartometric Analysis II of the whole Atlantic in the Pizigani chart.
For the Atlantic coast the best result was an equirectangular projection on 41.6° with 4.4 mm error. The Mercator had an error of 5.4 mm and a serious deterioration south of Cape Sim. Towards the south the map becomes more sensitive to a Mercator projection. The growing gap at Cape Sim is a further but strong indication that the Mercator was not the portolan projection. The small island at Cape Sim could be a time marker.[5]

Besides Cape Sim both projections show an unusually high error near southern France. The suspicion came up that this isolated anomaly was caused by a medieval compilation error. For a check the map was cut at the 50 gon N (45° N) parallel. 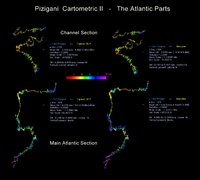 Cartometric Analysis II of the Atlantic sections. Here it was found that the English Channel section was from a northern portolan with their c. 50° projection.
A big surprise was the best fit for the "Channel Section" part north of 50 gon. It was an equirectangular on 50.4° with 2.73 mm error. Such a projection, probably on 55 gon N (49.5° N) was discovered elsewhere before. It was found that the northern maps "Caerte van Oostlant" (1543) and the "Carta Marina" (1539) had the very same type of projection. Both maps had a very wrong grid what proved the projection was no longer recognized by the scientists around 1500.

A projection of the "Caerte" and "Carta" on c. 50° N did not make sense.[6] It was previously concluded that some (pre 1500) cartographer made a mistake in the projection base or the maps originated from a larger map that went further south. Now this Analysis II of the Pizigani chart proved that speculation to be right. The Pizigani north had the suspected south part of these two northern maps. This find supports the rumors that a Jan Jansz alias de Paep in 1532 published a now lost map collection covering Europe from France (Bretagne) to the Baltic (Gdansk).

It seems the Pizigani was at one stage of transmission created by joining two maps. One was an equirectangular projection on 36° and the other one on 50°. A connection between the Mediterranean centered normal portolans and the 1500s north portolans was already suspected. But to find part of the north portolan in the normal portolan is a surprise. It proves that both portolan traditions go back to two maps. A northern one on 50° N and a southern one on 36° N. These two maps with gon grid need a special chapter below.

The cartometric relations of the Pizigani 1367 chart and the 16th century portolans of the north. It suggests an origin...
So far evidence for two stages of transmission could be identified: a world map from classical times in the beginning, and a polygon disc based cipher map from which a single normal portolan was compiled in high medieval times (probably 1100 - 1210). The Pizigani is a direct copy of that first normal portolan. There are no other compilations known (yet). Instead the northern portolans surfaced in the 1500s with different compilations. So their cipher map was transmitted to the 1500s.

Now the cartometric analysis gave evidence for two maps in different projections and scales. These two source maps for the cipher maps had to have a gon grid and were a stage in transmission after the world map and before the cipher map.

The scale accuracy is mainly influenced by medieval compilation errors. An analysis of the 21 Mediterranean 5 by 5 gon sections gave 13 sections with an average scale 6.5 % too large and 7 sections in average 3.9 % too small. One (128.6 %) was excluded. Overall that is a +- 5.6 % average scale error.

The southern gon map must at least have covered all that the Pizigani in its accurate parts here had. The northern limit was just south of Ireland.[8] The southern limit are the Canary Islands to 30 gon N. The eastern limit includes the Caspian Sea. The outline of this sea at the Pizigani has close similarities with that of the Atlas Catalan by Cresques (1375) and the more detailed Caspian maps of Atlas Egerton 73 and 2803 of c. 1510.[9] This relation suggests the Caspian was always part of the portolan transmission, and that most portolans without it may just reflect a lack of need - it was not directly reachable by Mediterranean ships.[10]

The western limit probably included the Azores islands. We know their "discovery" was ordered after a map from Italy reached Portugal in 1428. The Pizigani had an island in the Atlantic just at the latitude of the main island. With its distance less than 10 gon from the Canaries it would be unthinkable to leave out this important islands group.

The map we got that way has an unusually wide proportion totally unfit for any parchment sizes or codices. The lack of Ireland strongly points to a limitation in map height. So probably there was another map on the same skin side.

The scale and projection relations of the two maps. Both were derived from a Marinus type pinax.
From the northern map with its 50° N projection[11] we know from the Carta Marina that it included the eastern Baltic Gulf of Finland. But nowhere was the White Sea transmitted.[12] That makes a clear eastern end at 55 gon East of Ferro. The northern end was probably just at 80 gon N to include the northern coast of Norway.

The crucial feature of this map is the projection on 50° N. The scale analysis above suggested the scale at this latitude was probably the same as at the Main Atlantic section of the southern map. That would ease the combined use of the two maps and further explains where the odd 50° section in the southern map came from - it was just copied from the northern map.

If the northern map had the same width on the parchment as the southern, it would reach Hudson Bay in the west. If available there was a rationale to present the whole Hudson Bay.[13]

The map went at least down to 50 gon N, but we have no way to conclude the southern end of the map. But it would be convenient for a navigator to find the northern Azores at 43 gon N there, the others he could find on the more detailed southern map.

That raises the question, why a southern map at all? The northern extended south would offer a greater area of Africa and America than the two map solution offers. But it has to be remembered that the primary purpose of a sea chart is not to offer geographic knowledge but to point the way to ports of trade. In classical and medieval times the main ports of trade were in the Mediterranean. The southern map had two times the area and enough space for the most important port names here. So it seems possible that the names on the portolans date back to the early medieval gon maps.[14]

Reconstruction of the grid and outline of the two maps on a one sided chart
Close together the maps now cover an area with a 1 : 1.420 side ratio. That is central in the value range of early portolan chart parchments what had a mean value of 1.402.[15]

In the west the map would cover the later Norse settlements at Iceland, Greenland, Newfoundland and Vinland. It would extend to the western coast of Hudson Bay and covers 142 gon in longitude. It may be interesting to note that three such maps would cover the whole northern globe with an overlap of 6 % or just over one 5 gon rectangle column each. This suggests the scale size issue could have another reason besides the extension of the southern map.

This northern map - suggested by the cartometric analysis above - gives a hint regarding its maker and to a legendary medieval book cited in a partly burned letter by the great Mercator. See "The Maps of King Arthur?"