The Problem of the Portolan Charts

The Problem of the Portolan Charts

Portolan charts or atlases are nautical maps spread in the 14th century. In striking contrast to other medieval maps, they show a very modern like shape of the Mediterranean, Black Sea and part of the Atlantic coast. The similarity of all portolan charts is so obvious that A. E. Nordenskioeld (1832-1901) suggested all originate from one single "Normal Portolano".

Since the 19th century the origin of the portolan charts is subject of various research and conflicting opinions. It is still the greatest unresolved question in the history of science.

"One of the world's greatest and most enduring mysteries"

"People think maybe the Romans made the first ones and they've been lost, or the Phoenicians, or even aliens"

"The ancient Greeks and Romans had traditions of map-making, there's Ptolemy, and there's a line of progression. But here, it just explodes out of nowhere. It appears to be a true invention of the Middle Ages."

"The real mystery is that if you took all the notebooks from the sailors used in making these charts, along with the coordinates and descriptions, you still couldn't make this map."

"Even with all the research that has been done on them the world over, there's not a single question about them that we can definitively answer."

John Hessler, senior cartographic librarian at the Library of Congress.

Hereford mappa mundi. North is left. The lower middle is the Mediterranean
The most obvious paradox of the portolans is their development. The Hereford world map (pictured, right) is from around 1300, the same time as the first known portolans.[1] This crude map[2] is the most accurate none portolan world map we have until this time. A rapid development is still no paradox. Nevertheless the portolans represent a sudden jump to near modern accuracy without signs of development[3]. That is unique.

A typical portolan, the Ptolemy and a modern map. The 50% Error of the Ptolemy in longitude size is corrected here to allow a comparison.
But after almost 200 years of heavy use, the portolans were abandoned by the later 15th century scientists. They favored the newly discovered Ptolemy, despite the much higher accuracy of the portolans. According to Newton[4] Ptolemy had the circumference of the earth within 6% but the size of the Mediterranean 50% too large, even in latitude.[5] This latitude error was corrected by the scientists of the 15th century. But the longitude error for a long time was not. This proves the scientists of this time (ca, 1500) had less navigational knowledge than those who created the portolans at an unknown time before.

A printed map of the portolan area from 1570. It is a mix of Ptolemy and portolan. From Ptolemy it still keeps the size error of Mediterranean by 40%.
That ignorance of the portolans continued for the next centuries. In a typical chart of Europe and the Med of 1570, the Med basin is still 40% too large. Although the shape of the North African coast, the Levante and the Black Sea is borrowed from the portolans.

A printed map of the Kingdom of Naples from 1642 in comparison with a modern map.
This printed map of the Kingdom of Naples from 1642 already shows some input from land surveys. The shape of Italy is probably neither from portolans nor Ptolemy but from surveys. The other parts may still be from portolans. The errors of 30 to 45% are the results of dead reckoning maritime information. The mapmaker trusted the data of his time more than any traditional data. The longitude (on Ferro) of Naples is only in error by 12%, probably the result of astronomical observations. This map presents the accuracy of land and sea surveys of the 17th century.

A printed map of Egypt from 1679 with 35% error in size of east-west extension.
In a late 17th century map of Egypt, at a time land based longitude measurements were already possible, the longitude error is still 35% in favor of Ptolemy.

Unrecognized until the 19th century

In the later 18th century, with the help of the marine chronometer, our modern charts were created. Thus, not much before the 19th century scientists had a chance to realize how extremely accurate the portolans were. That was the main impetus for the large facsimile editions of portolans done in this century by Manuel Francisco de Santarem, Joachim Lelewel, Edme-Francois Jomard, Friedrich Theobald Fischer and Adolf Erik von Nordenskioeld. Some of them were more detailed than most editions of the 20th century.[6]

It is rather easy to create a map of an area one can oversee, like a map of a small town or of an island. Still a local chart of an area smaller than 10 km is feasible with moderate skills at fair accuracy. But a chart of the Mediterranean with ranges of 1000 km and more seems almost impossible to do without a way to fix absolute positions by astronomical navigation.[7] 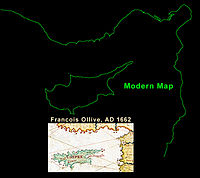 Cyprus on a 1662 portolan and from a modern map.
Upon closer investigation the portolans exhibit a striking paradox. In the long ranges beyond 200 km they have near modern like accuracy. But in local ranges below 20 km they are always of very poor accuracy and even worsening in the 15th, 16th and 17th century. On these short ranges most charts past AD 1500 almost left any link to reality and were useless for navigation. 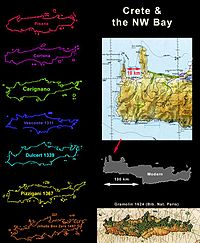 Crete on portolans and the North-West bay detail
For example Crete. Its size and position in the Mediterranean basin is quite precise. Both are long range data. But the detail shape of its coastline is very poor. Not even the very characteristic "U" bay at the north-west end is found. It took over 300 years until the first portolan with a crude hint of it arrived. But this chart of 1624 had the general shape of Greece worse than portolans.

That local versus long range accuracy is just the opposite one would expect. It is a paradox because anyone able to do long range fixes could chart local features with ease. And for practical navigation before 1800, the local accuracy was the more important one. That even enhanced this paradox.