Details and sources until 500 AD are found at the pages of Bibhistor and The Ptolemy Problem. The "Marinus of Tyre" pinax portolan heritage was first suggested by Nordenskioeld. Together with some pre-discovery maps it is discussed in Traces of a Classical Portolan World Map 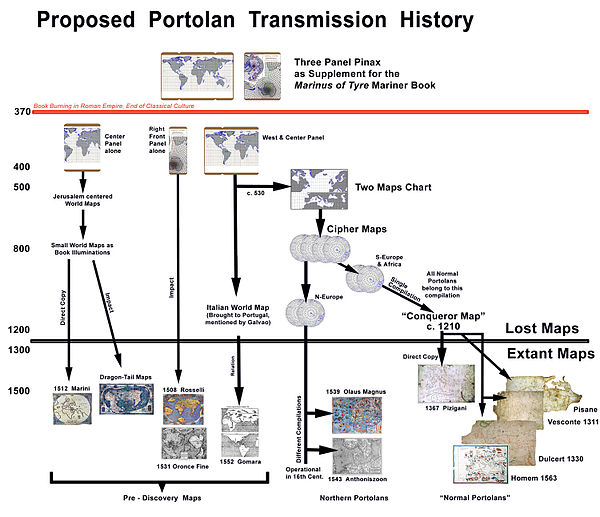 The proposed transmission history from Nordenskioeld's pinax to the pre discovery maps and the portolans.

c. 230 Diogenes Laertius wrote an encyclopedia of famous philosophers without any trace of Ptolemy.

c. 360 Assumed last edition of the "Marinus of Tyre" with pinax.

363 Assassination of Emperor Julian. Christianity from now on religion of Roman Empire.

c. 365 Assumed last edition of the "Marinus of Tyre" but without pinax.

391 Emperor Theodosius I. edict to close all pagan temples. That included Museums like the Library of Alexandria where Theon was the last director.

392 The Serapeum, the last public library of Alexandria destroyed.

c. 400 Bishop Synesius of Cyrene, a pupil of Hypatia, mentioned that the possession of "unaltered copies" was a serious crime.

415 Leading mathematician Hypatia of Alexandria (daughter of Theon) was killed as a witch. According to early medieval sources it was motivated by her work with astrolabes and "her exceptional wisdom, especially in regard to astronomy."[2]

c. 475 - 625 Assumed timeframe a mathematician living near the English Channel created at least two maps from a remaining pinax. Both were on an equirectangular projection. The northern was on c. 50° N, the southern on 36° N. Both were covered by a 5 x 5 gon grid and drawn on the same side of a chart. If the Gestae Arthuri cited by Mercator is at least partly correct, then it probably happened just before the year 530.

c. 1100 - 1215 Assumed timeframe the southern map was compiled back from a cipher map to be the first Mediterranean portolan map. All such normal portolans until at least the 1500s belong to this compilation.

1204-1261 Timeframe "Conqueror Map" that showed the conquest of Constantinople was drawn. The Pizigani chart of 1367 was a direct copy.

1258 - 1291 Timeframe Caerte Pisane was drawn. Most advanced state of portolans (see Gulf of Kos). It was compiled from an atlas by a layman who never before saw a complete portolan.[3]

1270 First mention of a nautical chart. It was on a Genoese ship in the Mediterranean. Probably on a portolan the ship's position was shown to Saint Louis.

1291 The two ship "Vivaldi" expedition was launched from Genoa to circumnavigate Africa and establish direct trade with India.

c. 1310 The Genoese priest Giovanni de Carignano drew the oldest signed portolan. This most outstanding 14th century portolan was without adequate reproduction allegedly destroyed by an air raid on Florence in 1943.[4]

1408 Map in possession of Portugal's King that showed the Cape of Good Hope and the way to the East Indies. Portuguese suspected classical origin.[5]

1428 Don Pedro, the eldest son of Portugal's King, bought a world map in Italy. It had the Strait of Magellan, the Dragon Tail and the Cape of Good Hope.[6]

1431 Prince Henry of Portugal ordered the discovery of the Azores.[7]

1498 Letter by John Day to Christopher Columbus that he can not supply him another copy of Inventio Fortunata.

1520 Magellan found his Strait "because he had seen it by a marine chart of the King of Portugal, which map had been made by a great pilot and mariner named Martin of Bohemia."[8]

1531 French mathematician Oronce Fine put in print his world map with a modern-like Antarctica. It is the first map with Greenland as an island.

1539 Bishop Olaus Magnus' "Carta Marina" in print. It was a partial compilation of the northern portolan map from a cipher map disc.

1541 Mercator published his globe with a different compilation of the Baltic.

1543 "Caerte van Oostlant" in print. It was still another compilation type of the northern portolan.

1552 Gomara published his book with the most accurate world map of this time. It was banned the next year and the copies gathered. The map is missing from most extant copies today.

1569 Mercator published his famous world map with the Arctic insert based on the Cnoyen Report.

1577 Mercator letter to John Dee about the Cnoyen Report of an Arctic expedition in the 1360s and a similar operation by the legendary King Arthur in 528 or 529.

1578 George Best mentioned details from inside the Inventio Fortunata that were in no other extant text.

1759 British Clockmaker John Harrison built the H4. Now it was possible to create marine charts with the accuracy of portolans.

1889 Swedish explorer Adolf Erik Nordenskioeld published his "Facsimile-atlas to the early history of cartography". He suggested a classical portolan origin in the Marinus of Tyre maps mentioned by Ptolemy.

1966 US Historian Charles H. Hapgood published his popular book "Maps of the Ancient Sea Kings". Based on Nordenskioeld he first clearly defined the Ptolemy problem. He suggested a link between portolans and other pre-discovery maps.

1977 US astronomer Robert R. Newton discovered that all verifiable observations mentioned by Ptolemy were faked. He found that in 1819 the well-known French astronomer J.B.J. Delambre wrote about the fake too but was ignored by all historians. Newton's find was ignored by all main publications as well.

1979 Swiss Geographer Georges Grosjean suggested classical portolan origin but transmission by a map that was cut in pieces.

1980s Cartometric studies in Germany (Mesenburg) and USA (Loomer) determine accuracy of Mediterranean portolans to be in 40 km (1 %) range. That is better than dead reckoning navigation by modern ships.

2007 A Swiss historian suggested the work of Ptolemy could be a fake from the 4th century.

2010 Discovery of a Gon grid as underlying base for Mediterranean portolan compilation in the 13th century.